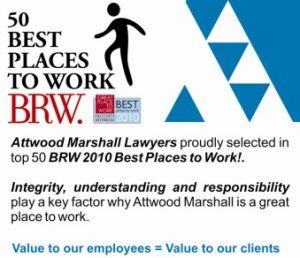 The crop of law firms appearing on this year’s BRW Best Places to Work list prove that an organisation needn’t be big to attract the best talent – and it only takes a few simple initiatives to keep them.

The highest rank law firm appearing on the list is Swaab Attorneys at number 13 (up from 32 last year), followed by Trilby Misso Lawyers ranked 32, Cornwall Stodart Lawyers at 34 (up from 36 last year) and Attwood Marshall Lawyers coming in at 38.

The two debutants on the list, Trilby Misso Lawyers and Attwood Marshall Lawyers, are both small, boutique Queensland firms, suggesting a link between a warm, sunny climate and happy employees.

“The climate does help.  It’s a beautiful winter’s day here and you couldn’t get a better natural view or a better work environment.  You couldn’t get that if you were in a high stress office.  We’ve got the culture and the setting to match the view,” he says.

The culture of the firm, he says, is underpinned by a clear and transparent approach to communicating with staff.

The firm specialises in acting for deceased estates and in areas of family law, including divorce.  “We’re dealing with it on a day to day basis and it’s stressful for people working here.  So we need to give them the tools to deal with that,” he says.

The fact that the firm comprises mainly women could also be attributed to the culture, he says.  Only six of the firm’s 50 staff are men.  “There’s got to be something about the way it is because it’s influenced by so many women – us blokes are outnumbered,” he says.

However, he says that like any commercial business, performance targets are in place to achieve optimum profitability.  “This is clearly communicated to them but you have to do it in a respectful and open way.”

The culture of the firm was tested during the downturn but didn’t waiver.  No redundancies were made, but some staff elected to work four day weeks.

The firm has a study leave policy in place for staff that provides financial assistance for approved work-related study.  The cost of continuing legal education is borne by the firm and additional annual leave is also given to account for exam periods.

The firm actively encourages staff to avoid working extended hours, with weekend work said to be a rarity.  Garrett says most employees work seven or eight hours a day.