Royal Commission into Misconduct in the Banking, Superannuation and Financial Services highlights ‘sue the b*stards mantra’

Attwood Marshall Lawyers Legal Practice Director Jeff Garrett – a lawyer of 33 years’ experience in civil litigation – reflects on the Royal Commission into Misconduct in the Banking, Superannuation and Financial Services.

WHEN former Australian Competition and Consumer Commission chief Graeme Samuel met with bank executives who quizzed him on how to stop the relentless public mantra of “banks are bastards”, he frankly responded they should “stop being bastards!” Reading his comments in a Sydney Morning Herald newspaper, I was taken back to when I first started work as an articled clerk at Attwood Marshall Lawyers in 1981.

My master solicitor and founding partner Bob Marshall had a figurine of a lawyer on his desk with a caption reading: “sue the bastards!”.  It was a fitting mantra for our firm which continues to this day – here we are, nearly 40 years later, still suing illegitimate banks and insurance companies.

In our personal injuries department, we witness daily the trauma caused by unfair decisions made by insurers which cost our clients any chance of rehabilitation or quality of life. Our commercial litigation team also sees daily the impact of financial advisers who, with their pursuit of personal commissions, have given incorrect advice. Of course, scandals of the banking, superannuation, insurance industries, and their ‘financial advisers’, come as little surprise to us lawyers who “sue the bastards”.

The Royal Commission into the finances sector

The Royal Commission into Misconduct in the Banking, Superannuation and Financial Services Industry has now concluded. The Commissioner, the Kenneth Hayne, submitted his final report to the Governor-General on 1 February 2019.

From bribery, forgery and ‘liar loaning’, to exploitation of the dead, countless of abhorrent practices rife within financial institutions have been exposed since the RC began. In April, AMP’s chief lost his job after the insurer admitted to lying to regulators. Around the same time Commonwealth Bank of Australia (CBA) admitted its financial planners charged fees from dead clients, in one case for as long as a decade.

The RC was punctuated with a damning six month interim report which found two prominent themes emerging from hearings: dishonesty and greed. In trying to comprehend motive, Commissioner Hayne said “too often, the answer seems to be greed — the pursuit of short-term profit at the expense of basic standards of honesty… How else is charging continuing advice fees to the dead to be explained?” 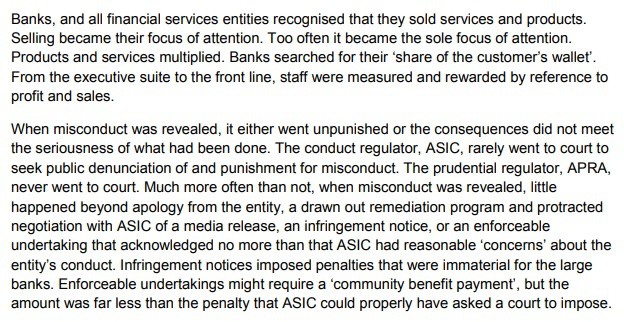 In 2018, submissions revealed former CBA chief Ian Narev received a performance bonus of 108% ($2.86 million) while a crisis unfolded over the bank’s botched life insurance policies, alleged money laundering and claims its credit insurance was mis-sold. It was also revealed, the CBA board was dissatisfied with the performance of its former chairman David Turner and requested he return 40% of his annual fees but he refused and the board moved on, with the incident kept secret from shareholders.

In the courts, it is unlikely criminal sanctions will flow from findings of the RC. Even the Australian Securities and Investments Commission expressed in its submissions work had to be done to stop misconduct, but conceded there was no evidence to instruct as to how. The problems of the sector are enshrined in its culture. This was highlighted not only the interim report of the RC, but also in the release of the new Banking Code of Practice and the release of a draft of the fourth edition of the ASX Corporate Governance Council’s Corporate Governance Principles and Recommendations, due for final release in early 2019. In the latter,  its draft ‘Principle 3’ suggests that “a listed entity should instill and continually reinforce a culture across the organisation of acting lawfully, ethically and in a socially responsible manner”, however this draft Principal has been rejected by industry stakeholders.

With such a weak response from the authorities and reluctance from industry stakeholders to change, there is only one way to teach the banks a lesson. Sue them, and hit them where it hurts.

‘Can you sue a bank for bad financial advice?’ a common inquiry to Attwood Marshall Lawyers

The most common inquiry to Attwood Marshall Lawyers’ commercial ligation team flowing on from the RC is for grossly negligent or fraudulent financial advice. Our lawyers are ready to fight for victims who have lost their homes, life savings, or quality of life, as a result of misconduct within the finances sector.

Who to contact to find out if you can you sue a bank for bad financial advice:

For a complimentary, obligation-free phone assessment of whether you are eligible for a No Win, No Fee claim for negligent or fraudulent financial advice contact: Commercial Litigation Department Manager and Senior Paralegal, Amanda Heather, on direct line 07 5506 8245, email aheather@attwoodmarshall.com.au. Find out more about our Commercial Litigation department by clicking here.